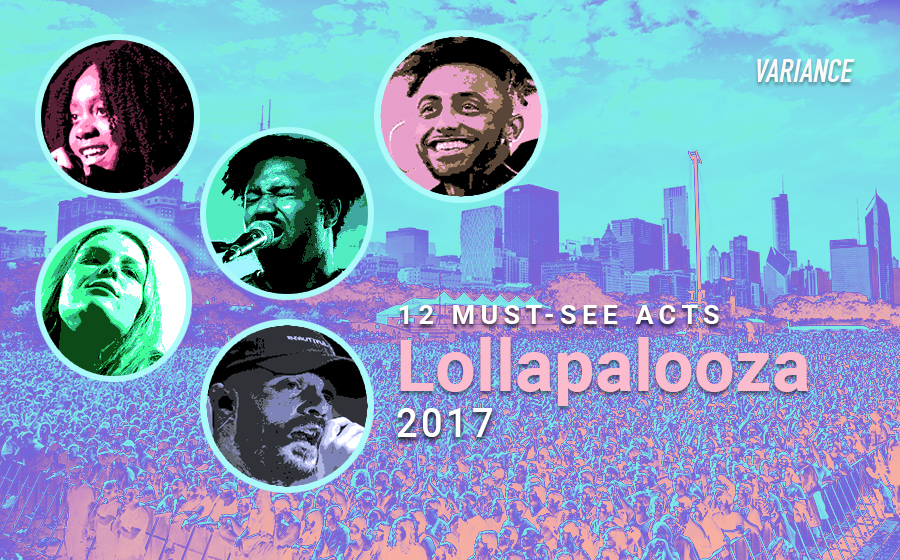 As Chicago gears up for the 21st edition of Lollapalooza this week, it may seem daunting to look at the massive, four-day lineup and decide whose set to see or skip. But we're here to make sense of it.

Beyond the obvious upper tier of favorites like Chance the Rapper, The Killers, Lorde, Arcade Fire, The xx, Run the Jewels, Cage the Elephant, Ryan Adams and Big Sean, there's a slew of great, must-see acts deep in the roster. So we dived in and hand-picked 12 artists we'll definitely be watching—and we recommend you should too.

Lolla runs Aug. 3-6, and whether you're at Grant Park for a day or all four, this list will be helpful.

Aminé (SAT 1:50 P.M., PEPSI STAGE)
The Portland rapper will be taking the stage just a week after releasing his debut album, which is a perfect summer record, a dose of sunshine in the middle of a seemingly non-stop stream of bad news in the world. And what a moment to be making his big launch at Lolla, as he also recently announced a fall tour in support of the album, so this will be a great chance to see him perform before he actually hits the road.

Bibi Bourelly (FRI 12 P.M., LAKE SHORE STAGE)
The German songstress may have gotten her start penning songs for Rihanna, but she's been coming into her own in the last couple of years. Now signed to Def Jam, Bourelly has been teasing a debut album, with multiple infectious singles released in recent months. Seeing her perform live is simply a must.

Duckwrth (SUN 1:10 P.M., BMI STAGE)
This West Coast emcee has been steadily rising in the past year as he's made a name for himself with his brand of funk-laced rap. His album I'M UGLY arrived late last year and Lolla is the only date on his calendar for the rest of the year, so this is the perfect time to check him out.

Jon Bellion (THU 6 P.M., TITO'S STAGE)
He's coming off a wild past year, releasing his debut album The Human Condition, which one of Variance's Best of 2016, and then touring on his own and supporting twenty one pilots as his singles "All Time Low" and "Overwhelming" lit up pop radio. As he prepares to hit the road again, Lollapalooza will be a great launchpad for this artist who has been going non-stop and never disappoints live.

Kweku Collins (THU 12 P.M., PEPSI STAGE)
With musical influences from Bob Marley to Kanye West to Paramore, Collins brings something special to hip-hop and that translates to his performances. Now an increasingly familiar name overseas, the timing seems right for the Chicago rapper to come home. While he hails from Evanston, a victory lap in Grant Park is fitting.

Maggie Rogers (SUN 2:30 P.M., GRANT PARK STAGE)
She's having a rollercoaster year already, as one of 2017's most buzzworthy artists. And while she's still a relative newcomer, she owns the stage like a pop veteran, proving that while her breakout single "Alaska" may be the song that first caught fire, she's got the material and the stage presence to become a true star. Do not miss her set.

Majid Jordan (FRI 6:30 P.M., PEPSI STAGE)
The Toronto R&B duo has been preparing us for their sophomore album with undeniable jams like "One I Want." With the full record expected this fall, their Lolla performance comes at just the right moment. Their moody, hypnotic show will easily be one of this year's highlights, we can assure you.

Michael Blume (THU 2:10 P.M., BMI STAGE)
The Brooklyn up-and-comer has only released a handful of songs until now, but he just shared a new one "I Am Not a Trend," just in time for his Lollapalooza debut. While many emerging artists seem to still be navigating the space, Blume seems to have a clear vision of himself as a musician, which is evident on stage, as he offers a colorful, dazzling live show.

Mondo Cozmo (FRI 1:50 P.M., PEPSI STAGE)
Lollapalooza weekend is a big one for the artist also known as Josh Ostrander, as his debut album Plastic Soul arrives Friday (Aug. 4), the same day he takes the Pepsi Stage. It's arguably an incredible moment for Ostrander, who has been part of multiple bands and had several label deals in the past but seems to have really hit his stride this time around. For those who haven't seen him live, his performance is absolutely electric.

Noname (SUN 2:50 P.M., PEPSI STAGE)
Over the past year, she's been shining a light on Chicago, repping her city well with the release of Telefone. Now she's coming home, while teasing new music. Although her collaborators like Chance the Rapper and Mick Jenkins have seen their profiles rise, Noname has done it at her own pace. But Lolla will offer her an opportunity to take the spotlight, deservedly, giving fans an earnest, no frills performance.

Russ (SAT 5:15 P.M., PEPSI STAGE)
Following the release of his debut album earlier this year, the Atlanta rapper has plenty to celebrate. He produced, mixed, mastered, engineered and wrote the full record, which is out now on Columbia Records. Having remained largely DIY for years, he brings a certain hunger and energy to his music. That same passion translates to the stage, where he surely won't disappoint the crowd at Grant Park.

Sampha (SUN 6:30 P.M., PEPSI STAGE)
His debut album Process, which was released in February, is one of this year's best. And while the British musician has worked with a slew of big names such as Drake and Jessie Ware, he's rightfully receiving his due now because of his own work. His album is flawless and his performances in support of the record have been nothing short of stunning. Lolla is in for a treat, because Sampha's performance is sure to be a powerful one.