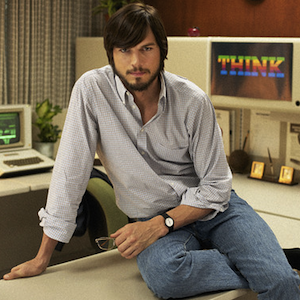 With new biopic jOBS—based on the life of Apple co-founder Steve Jobs—premiering this week at Sundance Film Festival, we now have the first clip from the film starring Ashton Kutcher. In the clip, Kutcher's Jobs and co-founder Steve Wozniak (played by Josh Gad) are discussing a new operating system created by the latter. Although only a minute long, it's certainly enough to pique interest in the film.

Jobs is seen trying to convince Wozniak of the magnitude of his idea. “This is freedom to create, and to do, and to build, as artists, as individuals,” he says. But a skeptical Wozniak replies: “Nobody wants to buy a computer—nobody!”

To which Jobs responds, “How does somebody know what they want if they’ve never even seen it?”

jOBS is due to release April 19. It's worth noting that mastermind Aaron Sorkin is also working on a Steve Jobs biopic of his own, said to center around only three key moments of Jobs' life.