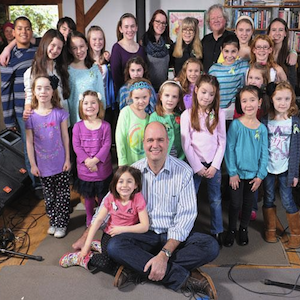 Children who survived last month's shooting rampage at Connecticut's Sandy Hook Elementary School have recorded a version of "Over the Rainbow" to raise money for charity.

Twenty-one children from Newtown, Conn., performed the song Tuesday with singer-songwriter Ingrid Michaelson on ABC's Good Morning America. Most of them are current and former students of the school, where 20 first-graders and six staff members were killed.

They recorded "Over the Rainbow" on Monday at the Fairfield, Conn., home of Chris Frantz and Tina Weymouth, two former members of the Talking Heads and Tom Tom Club rock bands. Copies went on sale Tuesday on Amazon and iTunes, with proceeds benefiting the United Way of Western Connecticut and the Newtown Youth Academy.

Kayla Verga, 10, said she was singing for a friend, 6-year-old Jessica Rekos, who was killed in the massacre.

"Singing the song makes me feel like she's with me and she's beside me , singing along with me," Kayla told GMA.

Watch video below. The song can be purchased here.