WATCH: NEEDTOBREATHE Dresses Up For 'Girl From Tennessee' on 'Conan' 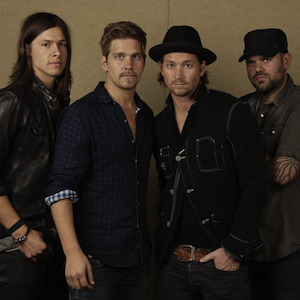 NEEDTOBREATHE performed on Conan Wednesday night, thus marking the band's fifth late night appearance this past year (Leno, Letterman, Ferguson, Kimmel and now Conan). Since it was Halloween (and fittingly the night before the CMAs), the guys decided to dress the part in their performance of "Girl From Tennessee," donning hair and makeup to impersonate Dolly Parton, Taylor Swift, Reba McEntire, Tina Turner and Minnie Pearl.

It was an interesting performance for sure. See picture left for the band without dresses and makeup.

Watch the band perform "Keep Your Eyes Open" on The Tonight Show With Jay Leno: