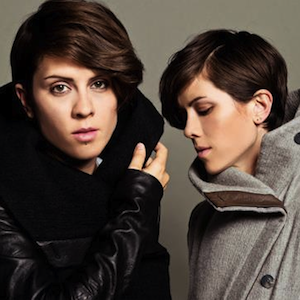 Another new Tegan & Sara track before you head off into the weekend! Of "Shock To Your System," which debuted via Vanity Fair on Friday, Sara explained: "I was writing in Montreal during the dead of winter and I would spend days by myself ... which resulted in a bit of cabin fever." She also describes the lyrics in the song as "an interior dialogue between the part of me that was transfixed by my loneliness and the other part of me that was ready to get over it."

Earlier in the week, the sister duo released "I Was A Fool," which they acknowledged at a show on Thursday was inspired by Rihanna.

Listen to "Shock To Your System" below: